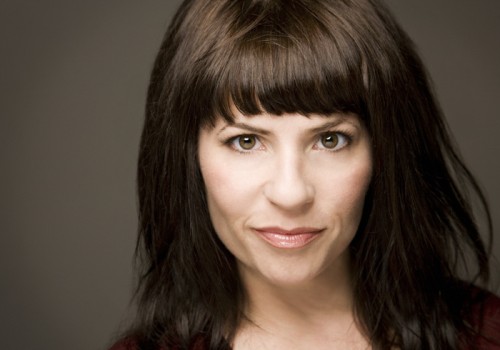 Were all funny adults funny kids? Sharon Houston was. Being funny and super duper likable has definitely paid dividends for Houston. Whether it’s performing stand-up, podcasting, or producing behind the scenes, Sharon Houston has tried it all, and as the “mayor” of L.A. knows show biz like few do.

Where are you from originally, and what has your career path been like?

I was born in Miami, Florida but I’ve lived everywhere: the Midwest, Southwest, South, Northeast, and now the West Coast. When I was moving around a lot as a kid, I hated it. Now I’m glad I went through that because I can easily make friends, I’m not afraid to introduce myself to people, and I pretty much can fit in everywhere. As an actress and stand-up, I can do just about every American accent imaginable, so it’s helped me creatively as well.

My career path has been very interesting. I am really grateful for all the opportunities I’ve had and all the things I’ve done, behind the scenes and in front of the camera. I’ve done a ton of hidden camera shows, two specials, three series, and I forget how many pilots.

Showcase at Flapper’s Comedy Club from Sharon Houston on Vimeo.

And I love podcasting! I’ve managed to take the misery of one of my day jobs (freelancing as a producer on daytime court TV shows) and turn it into a brand with my podcast. It’s such a great way for me to reach an international audience that I never would have reached before. Between having my podcast featured on AV Club’s “Outliers” section, being a guest on “Talkin’ Shit with Jim Jefferies and Eddie Ifft” and a guest on “The Crabfeast with Ryan Sickler and Jay Larson”, I have listeners who have turned into fans of my podcast and my stand-up. Living in the future where technology is inexpensive and at our fingertips fucking rocks! You don’t have to wait for anyone to pick you out of the crowd. You can do your own thing and people will find you, they’ll like what you do, and things really open up for you creatively and professionally.

How long have you been doing stand-up, and were you an actor first?

I’ve been doing stand-up a long time, fourteen years? Longer had I not taken three years off! I was a theater major and wanted to act, but only if I could be funny. I always knew I’d be a stand-up, though. 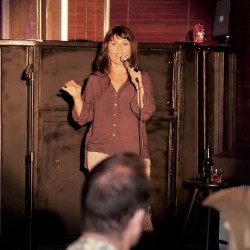 When I moved to New York, I signed up for a stand-up class with Lee Frank (great guy!!) at Stand Up New York, made friends, started hitting open mics. Lee is genius because he made it clear that we’d be playing shit holes for years that had little or no audience and that we’d be going on very late at night. He was right. I never thought “This sucks!” I thought, “Lee was right. This sucks!” Ha!

Were you a funny kid? Did you develop your sense of humor as a kid always having to make new friends with of all your moving around?

I was a really funny kid! I was a fat kid and had a hard time making friends. I was called “Fat Sharon”, “Hungry Hungry Hippo”, and “Sharon Houston Oilers.” I thought, “This isn’t cool. How can I break this cycle while still enjoying an entire bag of Doritos in one sitting?” I realized if I made people laugh I’d make instant friends and I wouldn’t have to lose weight! It’s way easier than dieting, I can tell you that. Being able to make friends wherever I went helped me when I started moving around a lot. It wasn’t hard for me to fit in and make friends because I could disarm them with my sense of humor. Here in L.A., I’m like the mayor. I have friends at the gym, the dry cleaners, my nail salon, the grocery store, and anyplace else I frequent.

How has being the mayor helped you get work and meet the right people in Los Angeles?

Being the mayor has not helped me in business or helped me get work at all. When I say I’m the mayor, I mean I know everyone in my neighborhood in a Sesame Street or Mr. Rogers’ Neighborhood kind of way. It makes me adorable but to not take that skill and move it in the area of business might be my biggest flaw. I’m not invited to the hot parties and I don’t make an effort to find out where they are because I just don’t think about that stuff. However, if there’s a bake sale in Larchmont Village that benefits kids in the neighborhood, I’m there. Or if one of my gym friends asks me to meet them at spin class, I’m on it. I volunteer at a girl’s home called Aviva. I go on bike rides on CicLaVia and Midnight Ridazz. But I don’t take it to the next level, Gagnam Style, because I just haven’t been in the position to do so. I went bowling with my friend Jamie and his pal, Ryan Adams, who also happened to kick my ass in a game of Galaga. I’ll never forget that fateful night. I talked a lot of shit and didn’t lose by a few points, I got my ass handed to me and I’m almost an expert Galaga player! That’s probably the most Hollywood thing I’ve ever done… as the mayor, that is.

What kind of behind the scenes work have you done, and how does that compare to being in front of the camera?

I’ve done lots of behind the scenes stuff. I’ve field produced, written, and field directed on reality shows for Mun2 and VH1, segment produced on two court shows and one network game show, was an associate producer on three court shows, field produced a pilot for E!, and more. The best job I ever had as a producer was producing content for a new music channel called IMF: The International Music Feed. That channel no longer exists, which is a shame because it was awesome. 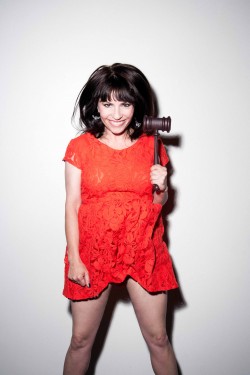 Working behind the scenes has served me as an actor/comedian because I understand the pressure the producers of the show are under. That’s the only reason I keep working as talent because I’m so pro, the same people keep hiring me.  As a producer it’s helped me because I know how vulnerable one feels when they’re on camera. I know how to make the talent (or real people if it’s a reality show) feel comfortable and be themselves.