When I was last living in LA in 2007 I stumbled upon what would become and will always be my favorite FM radio station: Indie 103.1 (R.I.P.) Everything about it was cool: the logo, the hosts,  the programming and the music. You couldn’t find the kind of music they played on a major commercial radio station. There was some truly different stuff on Indie 103.1.  For example, Steve Jones from The Sex Pistols hosted “Jonesy’s Jukebox,” and sometimes he’d bring in co-hosts for “Jonesy’s Jukebox Jury.” The random group he assembled would listen to, and judge, new music. If a co-host liked the song they would say “mustard,” and if they didn’t they would say “pants.” Maybe it was the other way around, but you get the gist.

I fell in love with the talk show Barely Legal Radio, on 103.1, hosted by Joe Escalante. His show was all about providing free legal advice as it applied to the entertainment world. So you have people calling in asking about record contracts, or if they should hire a lawyer, or how to copyright a script, and if you get it registered by WGA does that really protect your idea? And so on and so on. I learned a hell of a lot from listening to that show. Joe has a unique perspective when it comes to giving legal advice. He’s worn several hats in show business, in addition to earning his law degree, and whether he’s getting ready to hit the stage with his punk band the Vandals or putting on a suit to be a TV executive, Joe tells it like it is. 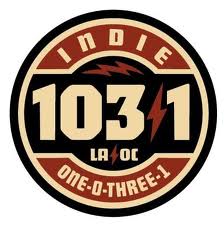 While Indie 103.1 is no longer on the FM radio dial, Joe Escalante and Barely Legal Radio live on. LCC caught up with Escalante to talk about studying the Vikings, why he quit being a TV executive and which one path to choose if you’re interested in music, film and TV.

Where are you from originally and what has your career path has been like in Los Angeles?

I’m from Orange County in Southern California. I’ve been working in the entertainment business all my professional life because that is a common SoCal Industry. If I was born in Pennsylvania, I’d be a coal miner.

I read that you majored in Old Norse at UCLA. Can you talk about that?

I wanted to go to Law School. I know that there was nothing to prepare you for that in an undergraduate degree, and I was right about that. There’s nothing and any attempt to do so is a waste of time and money. They teach you everything you need to know, including how to think, in Law School. So I picked a major based on the first undergrad class I took in the department of Old Norse. It was called Viking Civilization and History. You’d have to have your head examined if you see this class in the catalog and you don’t take it. My professor, Jesse Byock, was very engaging, so I stuck with the major and eventually learned Swedish, Old Norse, and Modern Icelandic. I read a lot of Sagas, and had a great time. I was accepted into Law School with this major, so I declare victory.

How has being involved in entertainment business helped your own artistic pursuits?

It helps sometimes and it hurts just as much. As an artist, you should really focus on your craft and not get too involved in the business or you will lose something out of your artistic side. On the other hand, I was able to help a lot of other artists get their career’s going like the Ataris, Blink 182, and…. oh maybe that’s it.

For aspiring writers and directors trying to break into the industry, should goal number one be to get an agent/manager?

No. Goal #1 is to spend thousands of hours on your craft so you end up with several people fighting to represent you.

Out of all the things you do, which is your favorite? Directing, producing, hosting, playing music…?

Why did you decide to leave your law practice?

I didn’t really have a practice. I was a TV exec making deals for the CBS Network. I left because the phone kept ringing about cool tours with bands like Offspring, No Doubt, Pearl Jam, NOFX, etc. I figured I’d come back if I had to. So far, I haven’t had to.

For someone trying to sell a reality TV or scripted concept, how important is it to have an entertainment lawyer before the pitching process?

It depends on the project but it’s more important to have something in the show that only you can provide. Examples would be, “I have a commitment from Leonardo DiCapprio to host.” or, “this is a show about men who have traveled in space and I have traveled in space and these guys are all my friends and will probably only work with me.” A lawyer cannot prevent someone from taking your idea and doing it without you in most cases. So paying for an attorney before you sell the show could be premature.

What advice would you give to someone equally interested in pursuing a career as a musician/songwriter/music producer as well as a career as a professional writer (film/tv), but can’t decide which path to focus on, or if he should pursue both?

My advice is to go with TV. It’s a better business and believe it or not, there are fewer charlatans. This is a no brainer. Even if you like music better, go with TV. Film is nice, but you can spend a great deal of time being unemployed. The amount of ad revenue in television is still strong and there are so many channels now that some kind of work will always be available. There’s few opportunities, and no security in the music business.